On 3rd October 1962 an 18 kilogram Mars meteorite
(the largest of its kind found so far)
narrowly missed a farmer as it crashed into a field
near Zagami Rock in the Katsina Province of Nigeria.

Since the late 1980s much of this meteorite
has been repeatedly cut up into increasingly finer pieces
so that it has become the most widely distributed Martian meteorite ever.
The so-called Lucite "Mars Cube", for instance,
contains an embedded vial with just 1/10 carat
of what is officially known as "Zagami". 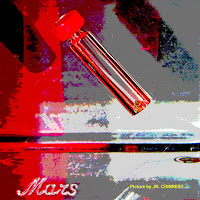 Link to: jpl.nasa.gov Zagami webpage
Link to: The Meteoritical Society

( For current research findings on
" environments that would have been potentially habitable
for Earth-like life on Mars", follow the link below:
Link to: Los Angeles Times, Science Now, 2 Oct 2017 )